The story of Maestro Heberto Garcia is a remarkable one, and worth telling at some length: Heberto combines exceptional shamanic maturity and breadth of experience and learning with incredible stamina and energy, and a good understanding of the Western world and its pressures. Unlike many native Shipibos, his command of Castellano is faultless, being university educated and his communication skills are way ahead of other shamans that I have had the good fortune to meet.

Doña Inés gave birth to Heberto one hot day in August 1978 in her home village of Maputae, on the shores of a beautiful lake in the district of Yarinacocha, the historical heartland of the Shipibos, several days south of Iquitos. During the political upheavals of the 90s, many Shipibos determined to preserve their traditional healing and their ancestral wisdom were forced to migrate to the relative safety of Loreto, the Peruvian district which contains the greatest expanse of virgin rainforest (about the size of the re-united Germany, Loreto has a population of about 500,000 – almost all of whom live in the capital, Iquitos). In many ways, the nerve centre of Shipibo shamanism, Maputae and its environs were long the preferred sites for some of the most astonishing feats of the Merayas of antiquity. ‘Meraya’ refers to the ninth and highest grade of shaman in the Shipibo tradition, famously capable of rendering him- or herself invisible, or appearing as a fearsome beast, for example. Yosi Ocha, Heberto’s maternal grandfather, is widely considered to have been the last of the Merayas. Heberto’s genealogy reads like a Who’s Who of Merayas and onanya jonibo (highly accomplished shamans and shamankas). Whilst no guarantee of shamanic ability, having such a genetic and cultural heritage does bestow an enormous advantage.

Since his earliest childhood, Maestro Heberto Garcia has endured long and arduous periods of shamanic training and dieting involving danger, discomfort and self-denial, a regimen which he continues in the intervals between attending clients. The story began, however, when Heberto was barely 2 years old…

INITIATION BY THE SPIRITS OF THE WIND

Heberto’s mother, Inés, is collecting the laundry that has been drying in the sunny back yard of their home. Suddenly, the sky becomes overcast by a great black cloud – held, by the Shipibos, to be the conveyance of Mayatai Jonibo (the traveling spirits) and a violent storm blows up as if from nowhere. The dreamy toddler wakes, and oblivious to the blustery gale, appears in the yard looking for his Mama. The spirits passing through snatch the soul of the infant Heberto. When the distinctive black cloud is accompanied by such a powerfully gusting wind, the custom of the tribe’s people is to take shelter indoors, taking special care to protect very young children by concealing them in large pitchers until the storm has passed, for it can be very dangerous for the physical, mental and spiritual health of the baby. When a soul has been snatched by the spirits, the symptoms are a generalized weakness, sudden attacks of vomiting and diarrhea and a dramatic, and dangerous diminution of the vital signs. So it was with young Heberto, who was sobbing very weakly.

Intuiting what had happened, Inés took him at once to see her uncle, the Meraya Luís, to see what he could do to restore his shattered health. Feeling for his pulse, Luís confirmed that Heberto was now dangerously weak; the Spirits of the Winds had taken his soul to an unknown and distant destination; the only hope would be to follow the spiritual traces left when the wind passed through the yard that morning. Without further ado, Luís ran to the house of a neighbouring Meraya, Bawan Sani, to enlist his help in the difficult mission to rescue Heberto’s soul.

Luís took a handful of black mapacho tobacco from his pouch, mixed it in a jar with water and stirred it into a paste of uniform blackness, which he swallowed in one go, and the ceremony was convened. As he went into trance, he entered the tent of mosquito netting, which is only used in the most powerful ceremonies. Joined by Bawan Sani, they struggled together to locate the black cloud, which they found circling around the vast Amazon forest. When the ceremony was finally over, Luís reported as follows: “The city of the spirits, or invisible beings, is enormous. Other beings, known as the spirits of the winds, also live there; they are remarkable for their huge ears and their plaited grey hair terminating in snakes’ heads. When they feel badly affected by the mindless activity of man polluting the environment, which is their habitat too, they get upset and by the strenuous motion of their enormous ears they produce great gales, storms and hurricanes to purify the contaminated air.”

“We followed them”, continued Luís, “on the winged horses, my allies who transport me to other sidereal spaces, and when we reached that place, I saw with great concern that many of them were engaged in a ceremony for the adoption of spirits – the spirit of Heberto was in the middle of the circle and they were about to transform him into one of them! They had even started the baptism process using plants of the wind, and had already applied the tincture to his forehead and had pronounced his mystic name – of their choosing – “Niwen Koshi”.Read more...Close

“When we arrived, the beings with the huge ears were quite amazed to see us, but we already knew quite a few of them, as we had had dealings with them on previous occasions. They were obstinate in their refusal to release Heberto’s soul back to us; they had already baptised him and applied their sacred tinctures and that, it would seem, was that. The life energy of the spirits of the winds was now flowing in his spiritual body which was, therefore, ready to embark on the great voyages which they undertake around the world. It was no easy job convincing them – we had to emphasise that he was a member of my family, and resort to certain ruses of persuasion. In the face of our insistence and perseverance – and when we threatened to use certain other measures against them – they finally decided to let us have him back, but, before handing him over, they assured us that Heberto, on earth, would never be a normal person for he had now absorbed the energy of the spirits of the winds; he would be a very special person, already possessing a weightless (spiritual) body, so that he could transport himself at will to other places, just as they can. Furthermore, at any time, he could reach them, and should he so desire, live with them in their community.”

“If you are determined to reunite him with his physical body”, they continued, “you must help his development so that he can be a special being on earth. You must put him on a strict diet for three months, out of sight of normal people, feeding him only fish and vegetables, and during this time you must bathe him with the preparation of the leaves and flowers of Nuyá Rao and Niwe Rao.’’  [The plant Niwe Rao is much used in shamanic treatments, primarily known for its efficacy in opening up, and strengthening one’s connection with spirit].  ‘This will be a solemn pact between us, and will ensure this child will always have a way of contacting us”. Agreeing to these obligations, I took him in my arms and brought him back to his physical body.

“In conclusion,” Luís told Inés, “from this moment on, your son bears the name Niwen Koshi, which means ‘the force of the storm‘ or ‘the life-force of the winds‘.” And thus the infant Heberto, or Niwen Koshi, recovered his health. 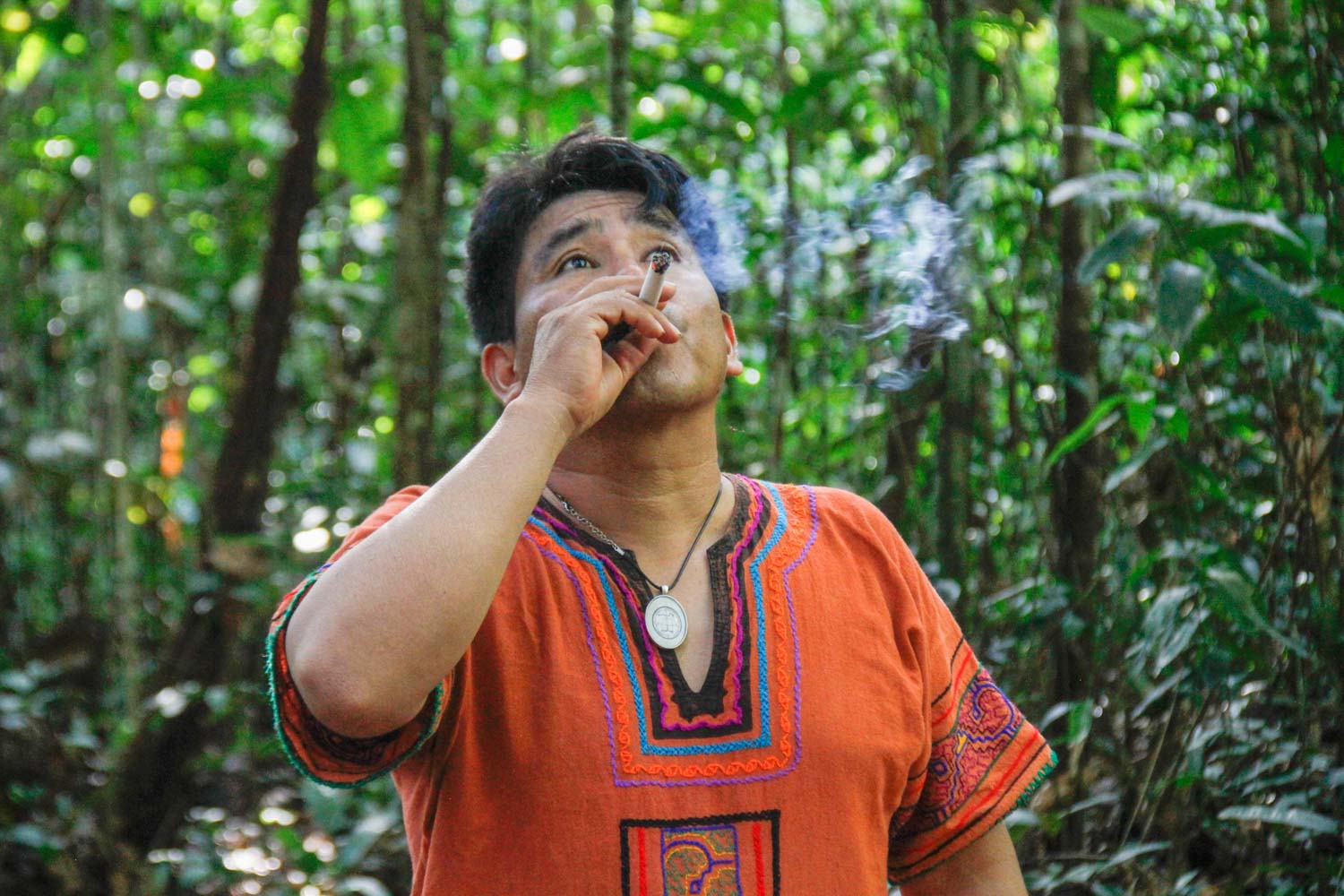 Some months later, Yosi Ocha embarks upon his grandson’s shamanic training. Joining forces with his brother, Luís, he takes Heberto into his care and they decide to make him diet Chullachaki Caspi and Remocaspi initially, making infusions of the bark of these great ‘palos maestros’, or teacher trees. They explained to young Niwen Koshi that he should start his diet with these trees because, in addition to helping to protect the physical body, they are also energetically linked to the spirits of the wind. He completed the three-month diet, which was judged an unqualified success in spite of his young age, but he now had to turn his attention to primary school.

During his first summer holidays, Heberto was accompanied by his grandparents, Yosi Ocha and his wife, the renowned shamanka Luzmilla, to his parents’ banana plantation and the dietas were resumed. This pattern continued throughout his school years; Heberto was to learn, firsthand, the power of all the most sacred natural medicines of the Amazon.

He was also privileged to have many distinguished teachers, among them Don Sharaco (an uncle of Yosi Ocha), one of the most gifted toeseros revered by the Shipibos. The following years were to enrich his experiences considerably with Yosi Ocha’s connections to shamans and shamankas of both the Ashaninca and Cacataibo tribes. When he finished his formal schooling, Heberto was probably the best-qualified ethnobotanist of his age.

The year 1996 was to mark a brutal change: together with his close family, Heberto witnesses the assassination, by the MRTA – the Communist terrorist group – of one of his uncles, and his wife. It is at this point that the family moves to the Iquitos region; Heberto enrolls at the National University of the Peruvian Amazon (UNAP) to study biology; the perfect western ‘scientific’ complement to his especially profound ethnobotanical knowledge. [Ethno-botany: the study not only of plants and their properties but the relationship between the plants and the indigenous people – that is, the uses to which they put them and their understanding of them – fundamental to shamanic treatments].

Heberto finds little time for shamanic studies for a couple of years; until he is visited, in a dream, by the Spirits of the Winds. Their message is direct: to fulfill his mission on this planet, he must resume his shamanic studies. He is accompanied by his parents to his grandparents’ house and takes part in a ceremony that is to change his life: he is called an ayahuasquero. There follow more years of arduous training and in 2000, Maestro Heberto Garcia starts receiving people for healing treatments with medicinal plants on family property, in the middle of the Amazon rainforest. He has continued his studies to embrace the shamanic disciplines of both the coastal regions of Peru and the Andes, so he is now also, for example, a huachumero (a practitioner of San Pedro).

In 2014, both to reach more people who may benefit from truly authentic shamanic treatments, and to better preserve his extraordinarily valuable heritage, Maestro Heberto Garcia established the Peruvian Institute of Shamanism and Natural Medicine (IPCHAMENA). Today, Maestro Heberto Garcia receives patients from around the world for health treatments and students who are motivated to study shamanic practices following the Shipibo tradition.

© 2023 YOSI OCHA – Ayahuasca Retreats – Shipibo Tradition – Iquitos, Peru. ‘Yosi Ocha’ is the trading name of the Peruvian Institute for Shamanism and Natural Medicine (IPCHAMENA Ltd.). All rights reserved – reproduction in part or in whole without permission is prohibited.